One of the biggest shortfalls of the iPhone, or any mobile phone for that matter, is the ability to shoot good quality photos at night. The small sensors in these devices have small pixels which make it difficult to capture enough light for this type of work. However, there are ways around this limitation if you have the right tools and the patience to put them to use. 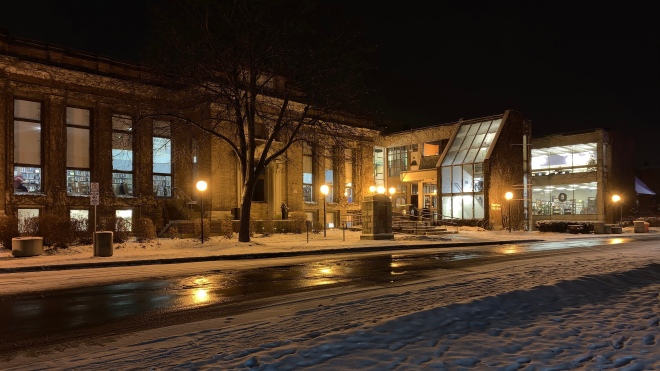 This is an 8-second exposure using Camera+ 2

The best way to be successful at night photography on a mobile phone is to take a photographic approach to it. Don’t just point and shoot, that will give you a noisy, or grainy image in most cases. The tools I’m referring to are a tripod and a camera app that will allow you to take manual control of the exposure. There are a few different apps out there that have this capability and I’m going to talk about one that I rely on most for night photography.

First, the tripod. Most mobile photographers never think of using a tripod because there’s a preconceived notion that mobile photography should be as simple as aim and fire. For most situations that’s fine but if you want to be serious about night photography with your phone, you need to be serious about your approach. You don’t need to spend a fortune on a tripod; just a small one will do the trick because the phone is much lighter than a DSLR, but get one that is sturdy, not too flimsy. You also need a mount for the tripod that will hold your phone. A simple Google search for “tripod head for mobile phone” should get you pointed in the right direction. 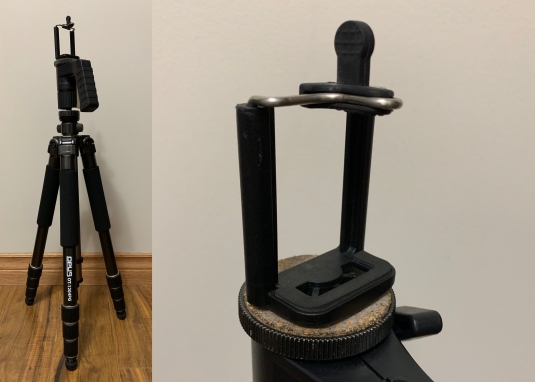 There are a couple of camera apps that I like to use for night photography but I’m just going to talk about Camera+ 2. I like Camera+ 2 because when you activate Slow Shutter Mode it has the ability to do a 30-second exposure while allowing for an ISO setting of 0.01. Slow Shutter Cam is another app that’s good for night shots and has been around for years but the ISO only goes down to 25. Still pretty good for quality, but not as good as 0.01.

With the ability to dial the ISO down to an insane value like 0.01, I can produce a night shot that has absolutely no noise, which makes for a very good image. It should be noted though that good quality night photos taken on a mobile device won’t be as crystal clear as ones shot with a traditional camera with a much larger sensor but hey, we get it, right?

There are different types of subject matter to capture at night and they will almost always include lights of some sort. Shooting stars or the Milky Way is, well let’s just forget about that. It’s not happening. It can be done to a degree, but not before doing intense research and acquiring some extra equipment. An urban setting like a simple street scene is a great place to start if you’ve never experimented with night photography before. 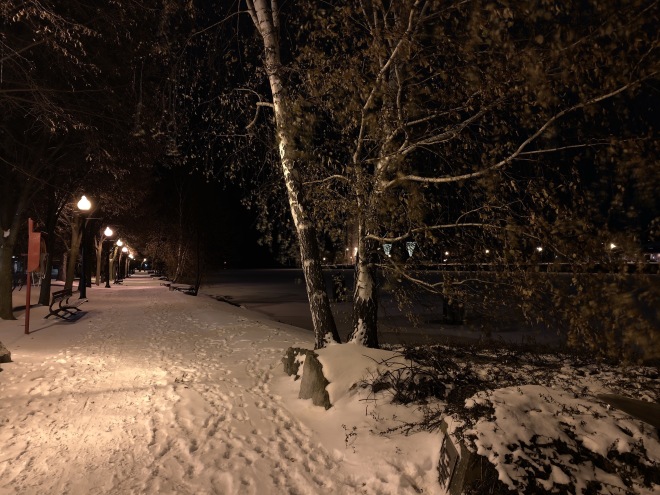 This image was exposed for 15 seconds at ISO 5

Before setting your exposure values, once you have your phone set up on the tripod, tap on the screen where you want the focus point to be in the frame. In Camera+ 2, you’ll need to activate Slow Shutter Mode and you do this by tapping the plus sign next to the shutter button. You’ll see a row of icons pop up and when you slide them around, look for the one that looks like an aperture ring. It will be labelled “Slow Shutter”.

Now for setting up your exposure. In traditional photography, exposure is the combination of three elements: aperture, shutter speed, and ISO. Most mobile phones do not have an adjustable aperture, however, there are a couple of devices that do have this feature, most notably the Samsung Galaxy S9 which sports a wide-angle camera with f/1.5 and f/2.4 aperture modes. But since the iPhone has a fixed aperture, we’ll focus on shutter speed and ISO.

If you want a good quality night shot with little to no noise you need the set the ISO as low as the scene will allow, and that will depend on how bright the scene is. The brighter the scene, the lower you can set the ISO at any given shutter speed. The image below illustrates how ISO affects the quality of an image. I zoomed to 100% on two photos taken of a sign above the door of a church. The left side of the frame was shot in Camera+ 2’s Auto Mode where the camera picks the best settings for the situation at hand. In this case, it was a shutter speed of 1/15th of a second at ISO 640. The higher the ISO, the more noise. The right side of the frame was a 30-second exposure with an ISO value of 4. As you can see the image is very clear with virtually no noise, and it’s especially evident in the light background of the sign. 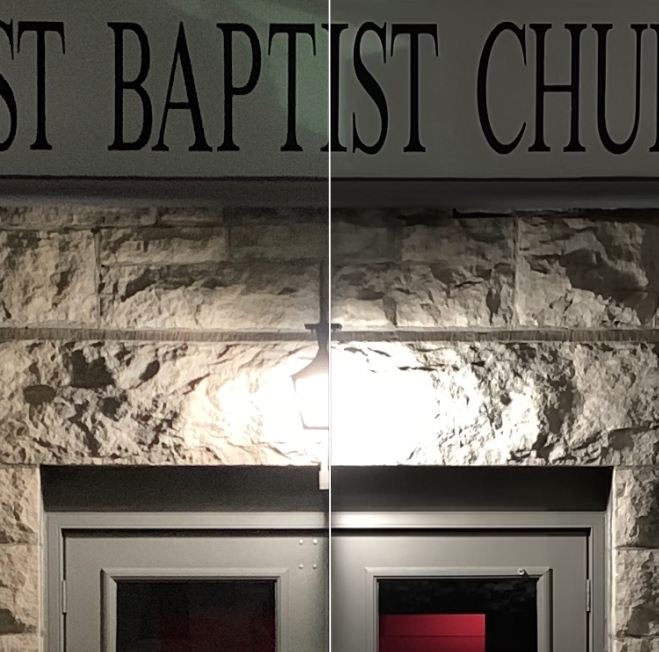 It’s also a good idea to make sure the Camera+ 2 app is set up to show you what your final exposure will look like in real time. To do this, go to the settings icon in the lower right corner of the screen, then to the Advanced Controls, and toggle on Live Exposure. 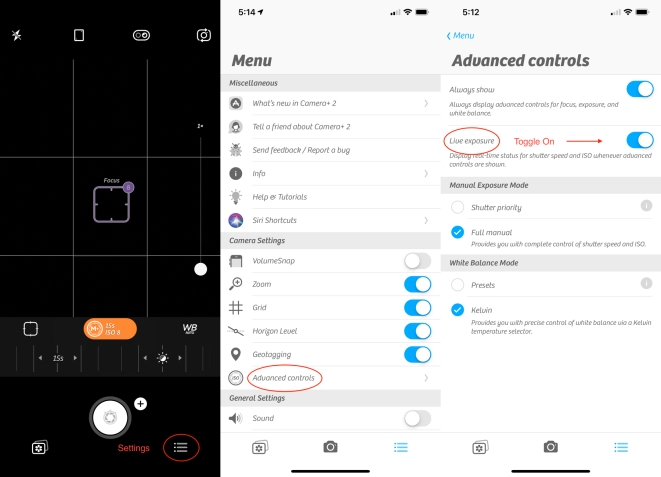 When taking the shot, it’s good to use a self-timer because when you tap the screen to initiate the exposure, you could be getting a bit of camera shake, and the lights in a night scene will look blurry throughout the exposure time if there is shake when it starts. I never recommend using the volume control on the phone as a shutter release as this could easily cause camera shake too. There is a self-timer function in Camera+ 2 but unfortunately, it’s a mode of its own and can’t be used in conjunction with the Slow Shutter mode. The best thing to do here is to plug in your headphones and use the volume button as a remote shutter release.

Try different exposure settings and see what will be right for you and the shot you are trying to get. It’s impossible to tell you which settings to use because every shot will be different. I recommend getting the ISO to a fairly low setting first, then adjusting your shutter speed until you see the image on the screen look the way you want for the final output. If you can’t achieve the result you desire, adjust the settings until your exposure is more to your liking.

Don’t be discouraged if the first few shots don’t turn out as you hoped. This kind of work takes practice. That’s why I said earlier that you need to have patience. Hit me up on Twitter if you have any questions or to show me some examples of your success. My username is @mcmillan_photo. I’d love to see how you do with this, especially if you’ve never tried it before.

Sparkle Coil
The Tip Of The Core
Dusk
Lovebirds taking in the sunset.
A Southampton Sunset
A lone cycler having a late evening snack. 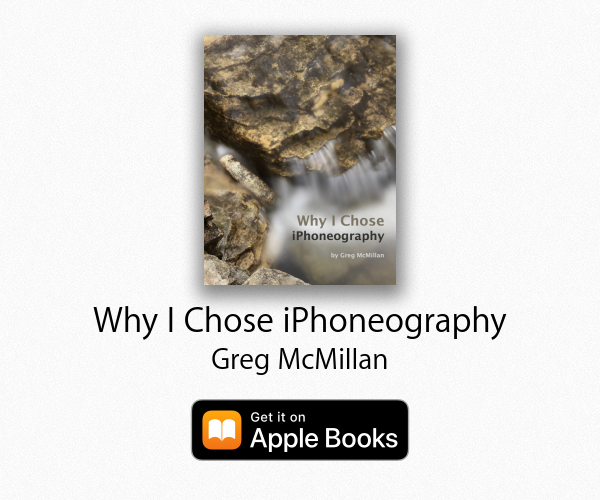